Almost overnight Seattle has changed. Yesterday the sky was gray, and rain drizzled all day. Today the sun was out, beautiful fluffy clouds filled the sky, and the temperature reached just above 70. I’m pleased to say, spring is officially here.

One of the best things about spring in Seattle is the bounty of local produce that appears at farmer’s markets. I’m not going to tell you to only shop at your local farmer’s market, but there are some fantastic eats to be had just down the street.

I’m of the opinion food should be sexy. The vivid colors in a bunch of rainbow chard. The crisp snap of green beans. Watching cream slowly melt into tomato sauce. So when I saw the freshest leeks piled high at my local farmer’s market last weekend I knew I had to buy them. Then when I saw fingerling potatoes sitting right next to them I knew it was time for Potage Parmentier; you know, Leek and Potato Soup.

This dish is beyond simple. A quick saute, a toss in boiling water, and before you know it you have a velvety soup that would be at home in any French countryside cottage.

Place 5 cups of water on to boil and liberally salt the water. 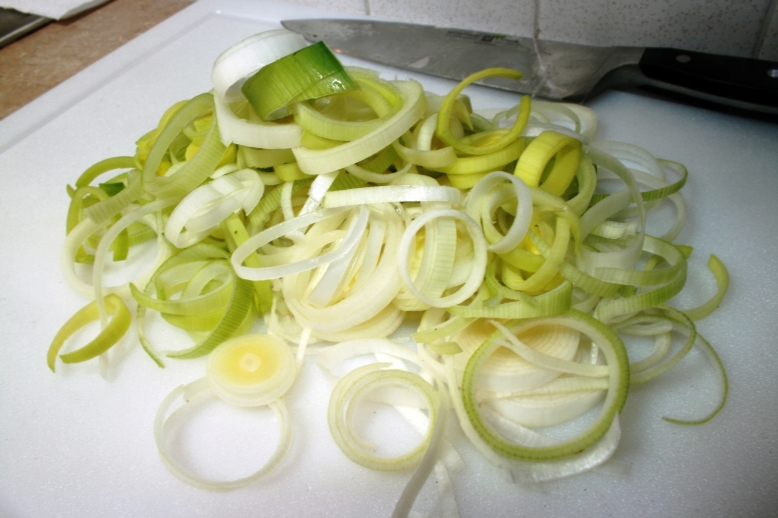 While the water is coming to a boil peel and dice your potatoes, then slice your leeks into thin rings. Get out a big saute pan (I used a 12 inch, stainless steel pan) and heat up 2 Tbsp. olive oil. Throw the potatoes and leeks in the hot oil and cook until they get some color.

You’ve officially made leek and potato soup. It’s delicious, it’s simple, it’s a great base for more amazing flavors. Try mixing in about ¼ cup sharp cheddar cheese for a subtle bite. Crumbled bacon adds to the fun as well. This is the beauty of leek and potato soup, it’s amazing on its own but even better when you bring a few friends to the party.